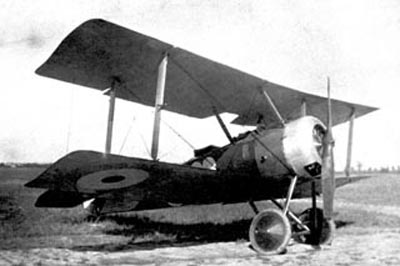 The Sopwith Pup was a single seater biplane fighter manufactured by the British Sopwith Aviation Company and was officially named the Sopwith Scout. It was nicknamed the Pup because it looked like a smaller version of the two-seat Sopwith 1½ Strutter; the name Pup was not used officially as it was reportedly thought to be undignified.

The Pup was highly regarded, it was pleasant to fly and was simple and reliable, perhaps the perfect flying machine. Its large wings gave it a good rate of climb and agility, especially at altitude up to 15000ft. It was underpowered compared to the German Albatros D.III but could turn twice in the space of a single turn by an Albatros.

It was used to great effect by the Royal Flying Corps, and the Royal Naval Air Service. One Australian pilot achieved fame flying the aircraft. While not normally used in combat by the AFC the pilot found himself surrounded by ten Albatross Scouts of the famed Richthofen Circus. In the ensuing dogfight he fought his way home - to a Military Cross. The first Pups reached the Western Front in October of 1916 and a total of 1,770 were built. After being removed from frontline service in mid- 1917 they were used by a Home Defence squadron against Zeppelins. The Pup was based on the personal plane of Sopwith's chief test pilot Harry Hawker. The Australian Flying Corps operated only 3 Pups, one with each of 5 Sqn (B2509), 6 Sqn (B6090) and 8 Sqn (D2192) and did not operate in combat with the corps.