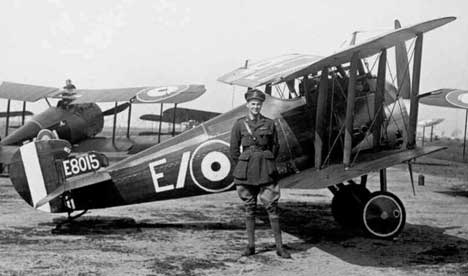 The Sopwith Snipe was a single-seat biplane fighter of the Royal Air Force (RAF), designed and built by the Sopwith Aviation Company during the First World War and was arguably the definitive fighter of the Allied side by the end of World War I. The Snipe was intended to be the replacement for the Sopwith Camel . The Snipe began production in 1918, with more than 4,500 being ordered. It began to enter service that year, the last year of the war. The Snipe saw service with the Australian Flying Corps 4 Sqn, 5 Sqn and 8 Sqn. The Snipe's structure gave far better visibility for the pilot in the cockpit, and was much easier to handle and had a superior rate of climb compared to the Camel, thus allowing it to fight Germany's newer fighters on more equal terms. The Snipe was built around the Bentley BR.2 rotary engine. The production of the Snipe ended in 1919, with just under 500 being built. The Snipe entered service in time to be involved operationally in the War and it proved to be a potent fighter performing a variety of duties. On 27 October 1918, Canadian ace William Barker made the Sopwith Snipe famous in a single-handed battle with more than 60 enemy aircraft (downing four) that earned him the Victoria Cross. With 7 confirmed victories, Australian Elwyn King scored more victories with the Snipe than any other ace.