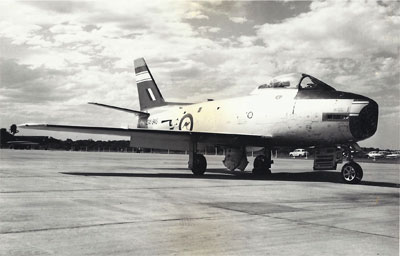 As early as 1949 the RAAF began planning a replacement jet fighter for the locally built CAC Mustang and DHA Vampire. in May of 1951, plans were finalised for CAC to build a locally redesigned version of the North American F-86F Sabre fighter. It was decided to install the 7,500 lb thrust Rolls-Royce Avon RA.7 turbojet in place of the 6,100 lb thrust General Electric J-47 engine. Major modifications included a larger nose-intake, positioning the Avon further aft than the J-47, increased fuel capacity, a revised cockpit layout, and two Aden cannons. Consequently, CAC had to redesign 60 per cent of the airframe. The resultant Avon-Sabre, became the best of the numerous Sabre variants built throughout the world.

The prototype CAC CA-26 Sabre Mk 30 first flew on 3 August 1953. As A94-101 it went to Aircraft Research and Development Unit (ARDU) in 1955. The first production Sabre, A94-901, flew in July 1954. As from 1960, Sidewinder air-to-air missiles were retrofitted. The last CAC Sabre, A94-371, was completed in December 1961. The first production Sabre, went to ARDU on 19 August 1954. No 75 Squadron became the first Sabre squadron after it reformed on 4 April 1955. No 3 Squadron received its first Sabres on 1 March 1956 and No 77 Squadron on 19 November 1956. In October 1958, No 3 Squadron deployed to RAAF Butterworth and was followed by No 77 Squadron in February 1959. As No 78 (Fighter) Wing, both squadrons used their Sabres against the Communist guerrillas until 31 July 1960. No 76 Squadron reformed in January 1960 and joined No 2 (Fighter) Operational Conversion Unit and No 75 Squadron as the Sabre equipped No 81 Wing, RAAF Williamtown. On 1 June 1962, eight Sabres deployed from Butterworth to Ubon, Thailand, to counter communist activity. This detachment became No 79 Squadron until it withdrew in August 1968. On 31 July 1971, the RAAF officially retired the Sabre from service.