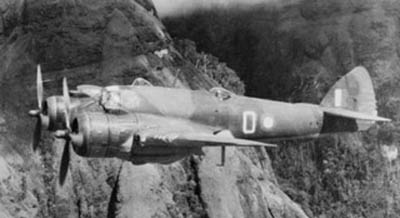 The Beaufighter was conceived as a private venture by the Bristol Aeroplane Company and the prototype first flew on 17 July 1939. It was virtually a fighter version of the successful Beaufort design. As a long-range, hard-hitting aircraft, the Beaufighter appeared ideal for the Pacific war theatre, and plans were made to produce an Australian version under the A8 designation. Meantime, UK-built Beaufighters were imported and the first aircraft, A19-1, arrived on 20 April 1942 and the last, A19-218, on 20 August 1945. These aircraft included Mks 1C, VI C, X and XI C, and the latter versions were fitted with dihedral tailplanes.

The Beaufighter commenced operations in 1942 with No 30 Squadron in New Guinea and No 31 Squadron in north-west Australia. In March 1943, the aircraft achieved world-wide fame when Damien Parer filmed the Battle of the Bismarck Sea over the shoulder of pilot Flight Lieutenant 'Torchy' Uren. Another kind of "victory" was claimed by No 30 Squadron at Goodenough Island on 2 November 1943 when A19-564 won the second of two unofficial races against a Boston of No 22 Squadron. Most Beaufighters were camouflaged but at least two, A19-2 (which was experimentally fitted with Wright Cyclones) and A19-10, retained a silver finish. Superseded by the Australian-built Beaufighter, the last English-built aircraft was taken off strength in 1951.