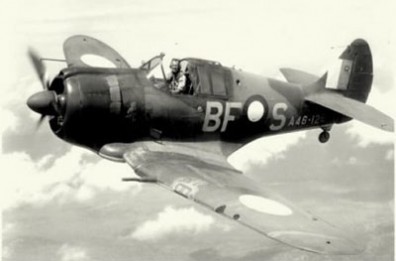 When Japan entered World War II in December 1941 Australia's situation was desperate; there was not a single modern fighter aircraft in the country. Britain was unable to meet its own needs and the U.S. was only just starting to produce fighter aircraft in quantity.

Within days of the Japanese surprise attacks on Pearl Harbor, the small Australian aircraft industry began work on designing a fighter aircraft. This aircraft was to be designed using the limited components which were available in Australia. The 1,200hp Pratt & Whitney Twin Wasp engine was being made under license in Sydney and the Wirraway advanced trainer became the base for the Boomerang's airframe. The RAAF ordered 105 Boomerangs on 2 February 1942 and the prototype flew on 29 May 1942. By war's end 250 aircraft had been produced.

The Boomerang was small by fighter standards and designed for manoeuvrability rather than speed. It handled well and, was well-armed with two 20 mm cannon and four .303 machine guns; all wing mounted. It was also equipped with armour to protect the pilot. Outright performance was mediocre, lively at low level but it fell away rapidly over 15,000 feet and the maximum speed of 265 knots was not sufficient to counter to the Zero. By the time the Boomerang entered squadron service the need for fighters had been filled by the Kittyhawks. The Boomerang found its real use as a close air support aircraft. The Boomerang served with No's 4, 5, 83, 84, and 85 Sqn RAAF