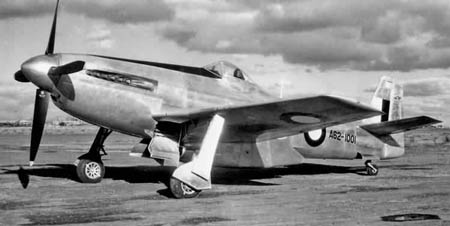 This prototype aircraft was built by the Commonwealth Aircraft Corporation and completed in February 1946. It was designed to be a replacement for the P-51 Mustang. Taxying trials began February 2, 1946. The aircraft was first flown on  March 4, 1946  by test pilot Jim Schofields who took her up at 18.10hrs from Fisherman's Bend for the fifteen minute inaugural flight. A further 23 flights were successfully completed, mostly by Scholfields but also by WGCDR J.E.Harper, SQNLDRS D.R. Cuming and G.C. Brunner. The total flight time accumulated when the aircraft was handed to the RAAF was 16hrs and 35 mins. The aircraft was delivered to the RAAF 1 Aircraft Performance Unit (1APU) on June 27, 1946. More pilots flew her from Point Cook: WGCDR G.D. Marshall, SQNLDRs Shiells and C.W. Stark and finally FLTLT J.A.Lee Archer. These flights came to an abrupt ending when Archer suffered a hydraulic failure (later found to be a leaking ground test gauge) on approach to Point Cook on December 10, 1946 which left him no choice but to orbit and burn off fuel. The main gear was only halfway down and would not retract. The tail wheel was down and locked though. On landing this struck the strip first causing the aircraft to porpoise and finally the air scoop dug in. The aircraft settled back on the fuselage and skidded to a stop, heavily damaged. Total flight time at this point 43hrs and 25 mins. The aircraft was taken to the Commonwealth Aircraft Corporation at Fishermens Bend on February 2, 1947 for repairs then to the Aircraft Research and Development Unit (ARDU). Flown by FLTLT Archer on the May 25, 1948 the aircraft achieved a maximum speed of 502.2 mph after a 4000ft dive. The highest speed recorded in calibrated level flight was 448mph (721Km/h) at 26400ft. The project was cancelled May 1, 1950 and the aircraft was transferred to 1 Aircraft Depot at Laverton and converted to components. The leased engines were returned to Rolls Royce .