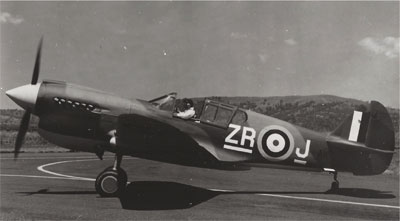 The Curtiss P-40 was a U.S. single-engine, single-seat, low-wing, all-metal fighter and ground attack aircraft which first flew in 1938, and was used in great numbers in World War II. Warhawk was the name the United States Army Air Corps adopted for all models P-40. British Commonwealth air forces gave the name Tomahawk to models equivalent to the P-40B and P-40C, and the name Kittyhawk to all later versions. The P-40's lack of a two-stage supercharger made it inferior to Luftwaffe fighters and thus the P40 was rarely used in the European theatre. However, between 1941 and 1944, the P-40 played a critical role with Allied air forces in five major theatres around the world - China, the Mediterranean Theatre, the South East Asian Theatre, the South West Pacific Area and in Eastern Europe. P-40s first saw action with British Commonwealth air forces in the Desert Air Force, in August 1941.

The P-40's poor high-altitude performance was of less consequence in the North African Campaign and its bomb load, armour, and good range were valuable. The Royal Air Force's No. 112 Squadron was the first to fly Tomahawks in North Africa. Two RAAF squadrons serving with the Desert Air Force, No. 3 and No. 450 Squadrons, were the first Australian units to be assigned RAF registered P-40 Tomahawks. Clive "Killer" Caldwell, was Australia's greatest WW2 ace. (Caldwell scored most of his 28.5 kills while flying Tomahawks in North Africa.)