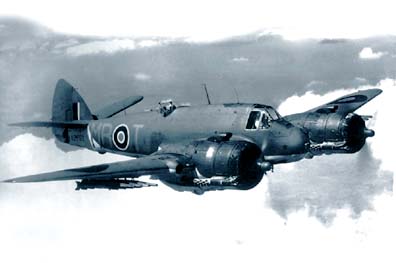 In 1942, the British-built Beaufighter began operating with the RAAF as the A19. These aircraft proved to be extremely effective in operations, and DAP planned to produce an Australian version when the Beaufort contracts were completed.
Following the decision in January 1943 to commence Beaufighter production, the Bristol Company dispatched some 55,000 miniature negatives to DAP. Originally, it was planned to produce an Australian equivalent of the British Beaufighter Mk VII, but throughout 1943 innovations such as dive-brakes and rocket projectiles began to be introduced. Finally a version basically similar to the British Beaufighter TF Mk X was produced as the DAP Bristol Beaufighter Mk 21. Unlike the British version, the ASV radar and dorsal fin were never fitted. However, like the Mk Xs , all the Hercules XVIIs had their two-speed blowers made fully operational, thus becoming Hercules XVIIIs.

The first DAP Beaufighter was flown on 26 May 1944. The quiet engines and the devastating fire-power had earned the A19 Beaufighter the nickname "Whispering Death" and the Australian A8 version continued to wreak great havoc throughout New Guinea, the Celebes and the Philippines. The aircraft served with Nos 22, 30, 31, 92 and 93 Squadrons, and when production ceased, a total of 364 DAP Beaufighters had been built.

In the post-war years, Beaufighters continued to operate with No 30 Squadron, but reduced to a target-towing role. Two Beaufighters, continued to be used at Woomera, these aircraft operated with kangaroo roundels. The last aircraft, was retired in1957.