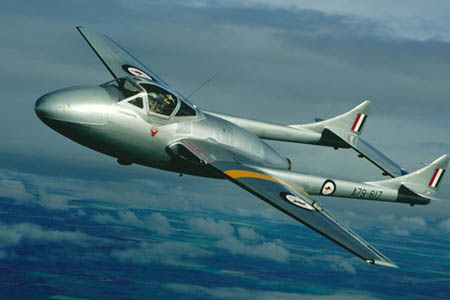 In 1946 approval was given for the purchase of an initial quantity of 50 Vampire aircraft for the RAAF. The first three machines were British-built aircraft, an F 1, F 2 and FB 5, and were given serial numbers A78-1 to 3. The first CAC-built Vampire F 30 fighter (A79-1) flew for the first time in June 1949 and was followed by 56 more F 30's before the final 23 aircraft were completed as FB 31's with strengthened and clipped wings with underwing hard points. The last FB 31 was delivered in August 1953. All aircraft built in Australia were to be powered by the CAC license-built Nene engine. Of all the Fighter aircraft produced, only the first two had sequential serials, A79-1 and 2. For security reasons, all later serials were scrambled. Built under the same RAAF serial (A79) but having sequential numbers were 110 two seat Vampire trainer aircraft.

RAAF operations were conducted by No 78 Wing, comprising Nos 75 and 76 Squadrons. This Wing was sent to Malta in 1952 to 1954 as part of the island's defences, and flew FB 9s hired from Britain with RAF serials. Vampire fighters served with Nos 21, 22, 23, and 25 Squadrons of the Citizen's Air Force (CAF) until CAF flying ceased in 1954. The trainers were operated by No 1 Advanced Flying Training School at RAAF Bases Point Cook and Pearce, the Central Flying School, and Nos 2 and 5 Operational Training Units. Trainers were also attached to the CAF squadrons. The Vampire trainers served until replaced by Macchi MB-326H aircraft from 1968, with the last sortie being flown in September 1970.