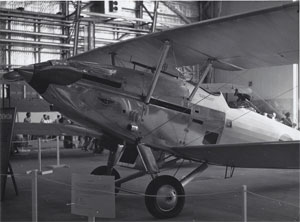 The Hawker Demon was developed from the Hawker Hart bomber to address the Royal Air Force's (RAF) lack of a fast fighter aircraft, the Demon went into production for the RAF in 1932, with a total of 304 aircraft eventually produced.

In August 1934 the Australian Government ordered 18 Hawker Demons for the RAAF. Powered by a Rolls Royce Kestrel Mk V engine, these aircraft were for use as general purpose/fighter aircraft. Subsequently a further 36 were purchased for army co-operation and fighter-bomber duties and another 10 for target towing and training duties, with the 64 Demons serving with Nos 1, 2, 3, 12 and 22 Squadrons and No 1 Communications Unit.

On the eve of World War II, the 54 Demons still in operational service were progressively replaced by CAC Wirraways, for use in the training and communications roles, and the last of the Demons were eventually phased out by the end of the war.