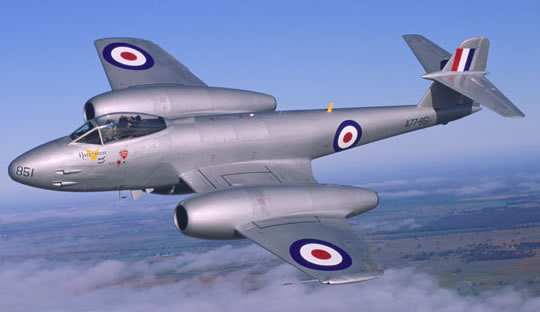 The British Gloster Meteor first flew in 1943 was the first operational Allied jet fighter aircraft. It commenced operations in mid-1944 in the RAF, nearly eight months after the German Messerschmitt Me 262 (the world's first operational jet). In early 1946 a Meteor set a World Air Speed Record of 616 mph; also In 1946 a Meteor captured Australian newspaper headlines when it flew over Melbourne at 490 mph. Imported on 7 June 1946, this Meteor F 4 carried out trials at Laverton and Darwin and at one time, carried two identification numbers - RAF serial EE427 and the RAAF allocation A77-1.

The RAAF acquired 113 Meteors between 1946 and 1952, 94 of which were the F 8 variant. These aircraft saw extensive service during the Korean War with the RAAF's 77 Sqn which was part of the British Commonwealth Forces Korea. They were used mainly in the ground-attack role but also accounted for three MIG-15s. Forty-one F 8s and three T 7s returned to Australia aboard HMAS Vengeance and by 1958 most Meteors had been replaced by CAC Sabres. The remaining Meteors served with Citizen's Air Force squadrons until the RAAF "officially" retired the Meteor in 1963. Even after their retirement, Meteors with RAAF and RAF serials continued to fly on Ministry of Supply trials at Edinburgh and Woomera and included F 4s, T 7s, F 8s, U Mk 15 and 16, U Mk 21 and 21A, and NF 11s (including A77-3) until at least the late 60's.