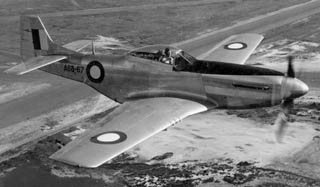 One of the finest American fighter aircraft of World War II, the North American Mustang owed its origin to a Royal Air Force (RAF) specification for a single-seat fighter to replace the P-40 kittyhawk. The first flight took to the air in October 1940, with production Aircraft in RAF service by the end of 1941. The original 1,150 hp Allison engine lacked performance and once it was replaced by the proven Rolls-Royce Merlin, the aircraft excelled. Through P-51B, C and D models, the Mustang became one of the finest Allied fighters of World War II and was just as capable at long-range escort as short ground-attack sorties. Fitted with a bubble canopy the P-51D was the most widely produced version of the Mustang, with 8,956 built.

In November 1944, RAF Mustangs were first flown by the RAAF's No 3 Sqn in Italy. In 1943, the Australian government arranged for the Commonwealth Aircraft Corporation (CAC) to manufacture the Mustang Mk IV (P-51D) the prototype A68-1001 was used for development trials and the first Australian production Mustang, A68-1, flew on 29 April 1945. A total of 214 Mustangs of several different models were constructed in Australia. A contract for a further 250 Mustangs was cancelled and 298 lend-lease P-51Ds and Ks were taken on strength (A68-500/583 and A68-600/813). Produced too late for World War II, RAAF Mustangs were assigned to Japan for occupation duties and Nos 76, 77 and 82 Squadrons were assigned. In 1949 Nos 76 and 82 Squadrons withdrew to Australian and the Mustangs of No 77 Squadron remained to take part in the Korean War from June 1950 until April 1951 when they were replaced by Gloster Meteors. In Australia, Mustangs remained in service with Citizen's Air Force until 1959.