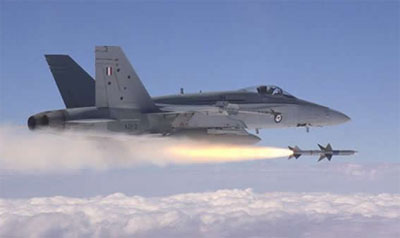 Australia's shortlist for the Mirage replacement had only two candidates in November 1979, the General Dynamics F-16 and the McDonnell-Douglas F/A-18 Hornet. On 20 October 1981 the Hornet was finally selected and an initial order for 75 Hornets was placed in November 1981. The order consisted of 57 single-seat F/A-18As (serial A21-1 to A21-57) and 18 two-seat F/A-18Bs (A21-101 to A21-118). The Hornet provided the Royal Australian Air Force with a giant leap in technology over the venerable Mirage.  The pulse-doppler radar had a look-down  shoot-down capability; the inertial navigation system, mission computers and on-board sensors allowed the pilot to accurately navigate around enemy positions and avoid potential conflicts; and the head-up display meant the pilot was not constrained by the need to be head down monitoring aircraft performance and weapons systems.

The Australian Hornet program called for the first two aircraft to be entirely assembled by McDonnell-Douglas in the USA with the remaining 73 to be assembled by the Government Aircraft Factories (GAF) in Victoria. A21-103 made its first flight at Avalon on 26 February 1985, reached a speed of Mach 1.6 at an altitude of 40,000 ft. This aircraft was delivered to 2OCU at Williamtown on 17 May 1985. At the same time history was made when A21-101 and 102 were flown non-stop from Naval Air Station Lemoore in California to RAAF Base Williamtown in New South Wales on a ferry flight that required USAF McDonnell Douglas KC-10 Extender tankers to refuel each of the Hornets 15 times.

The first 14 aircraft were all allocated to 2OCU to enable the start of Hornet training. The F/A-18 simulator was installed late in 1985 and on 25 November the first single-seater (A21-1) was accepted. No 3 Squadron became the first operational Hornet unit at Williamtown. The next unit to re-equip was No 77 Sqn at Williamtown in May 1987.The final RAAF Hornet unit was No 75 Sqn which commenced operations at RAAF Tindal in September 1988. On 15 December 1988, the last RAAF dual-seat Hornet, A21-118, was delivered and the last single-seater Hornet, A21-57, was delivered on 12 May 1990.

RAAF Hornets maintain a presence for the five-power Integrated Air Defence System (IADS) at RMAF Butterworth with deployments each year. RAAF F/A-18 Hornets have also been deployed to Diego Garcia and the Middle East Area of Operations and have flown aerial patrols within Australia as security forces during the Commonwealth Heads of Government conference and the 2006 Commonwealth Games in Melbourne.