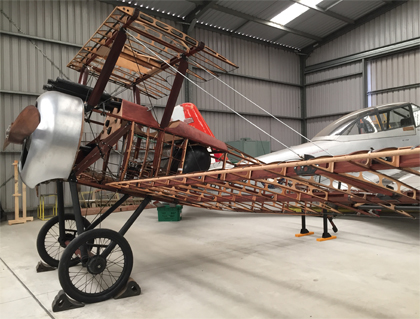 Fighter World volunteers, meticulously reconstructing a Sopwith Camel WWI fighter aircraft from original drawings, have fitted the lower wings. This was a significant step in the construction phase and the projects engineers John Hannan, John Stephens, Roger Foster and Graham Haynes acknowledged that lifting the delicate wings into place had been a heart stopping moment.
The Sopwith Camel prototype first flew in December 1916 and was armed with two .303 in (7.7 mm) Vickers machine guns mounted in front of the cockpit firing forward through the propeller disc. A fairing surrounding the gun installation created a hump that led to the aircraft acquiring the name Camel. Its agility in combat made the Sopwith Camel one of the best remembered Allied aircraft of World War I.