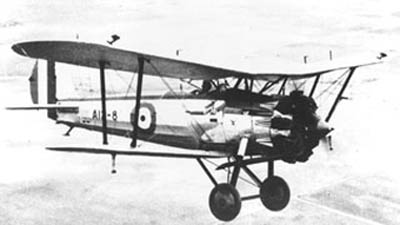 The Bristol Bulldog was a single-seat biplane designed during the 1920s by the Bristol Aeroplane Company. The Bulldog was the most famous RAF aircraft during the inter-war period with over three hundred Bulldogs being produced. In September 1926 the Air Ministry stated a need for a single-seat fighter capable of operating in day and night-time conditions; to be armed with two 0.303 in (7.7 mm) Vickers machine guns and to be powered by a radial air-cooled engine. The Bulldog MkI took to the skies in May 1927. The full-production Bulldog came in the form of the MkII, which had a modified structure but in every other respects was identical to the original Bulldog.

The aircraft entered production in 1928, entering service the following year and becoming, during the early 1930s, the most widely used aircraft in the RAF. It was cheap to maintain and thus, at a time of defence budget constraints, was the more preferable option to any other competitors. The Bulldog proved to be quite successful and was exported to several foreign air forces. The Bulldog was withdrawn from RAF service in 1937.