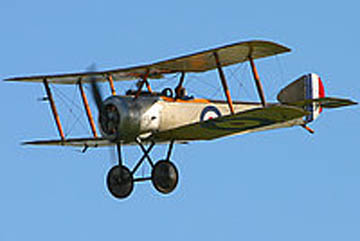 The Sopwith Pup was a single seater biplane fighter manufactured by the British Sopwith Aviation Company and was officially named the Sopwith Scout.

It was used to great effect by the Royal Flying Corps, Australian Flying Corps (AFC) 5 Sqn, 6 Sqn and 8 Sqn and the Royal Naval Air Service . Sopwith Pups were operating with the Australian Air Corps in 1920, and in June of that year Pup C523 (later A4-3) appeared in the Melbourne Exhibition Air Show. When the RAAF was formed in 1921,11 Pups were accquired from AFC and flown until 1925.

In December 1924, the 'The Australasian' published photographs of the first RAAF Aerial Pageant. In pride of place was a remarkable picture of a Pup 'balloon-chasing', a stunt at which the highly manoeuvrable aircraft had no equal.

The Sopwith Pup remained in service at Point Cook until 1925.