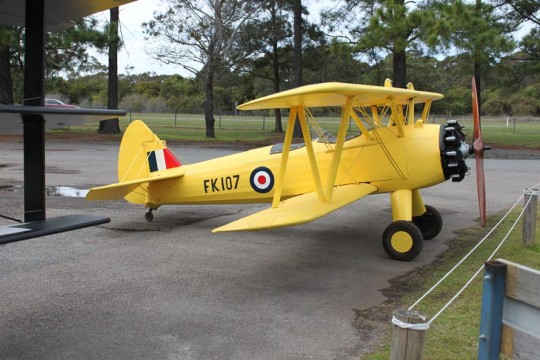 The Boeing Stearman or Kaydet is a two seat bi-plane that first flew on the 26th of November, 1934. The aircraft was produced at the Stearman Aircraft Division of Boeing in Wichita, Kansas and served as a primary trainer for the USAAF (N13-N17), the USN (as the NS & N2S), and with the Royal Canadian Air Force as the Kaydet throughout World War II with over 8,584 aircraft being produced between 1936 and 1944.

The replica now hanging from the roof of the main hangar arrived in a state of disrepair following its use as a prop for an Australian made movie called ‘Kangaroo Jack’. It appeared in the movie marked as ‘Dingo Air Charter’ with a drunken pilot and featured in a crash scene. The Stearman replica

was carefully restored by the volunteers at Fighter World.