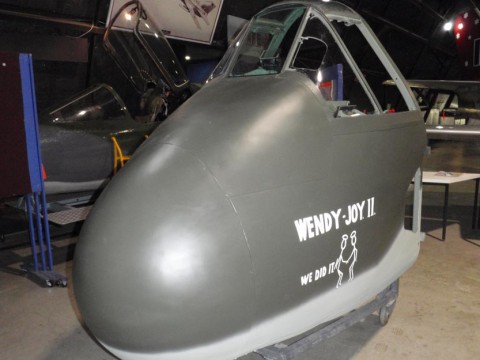 In total, 5,584 Beaufighters were built between 1939 and 1946, including 365 built by the Department of Aircraft Production in Australia; 581 served with RAAF squadrons in Australia and the South-West Pacific. The last Australian Beaufighter was retired from service in 1957.

The Beaufighter cockpit nose section on display at Fighter World was constructed at the Historical Aircraft Restoration Society (HARS) at Albion Park by Mr Rob Grienart. The nose section is marked to represent the Beafighter A19-50 ‘Wendy Joy II’ operated by Mostyn Morgan and Fred Cassidy from 5 Mile Drome (Wards Strip) near Port Moresby.

Fred Cassidy was a member of No 30 Squadron RAAF and flew in the Battle of the Bismarck Sea mission when an entire Japanese reinforcement convoy bound for Lae in Papua New Guinea was sunk in a single day by Australian Beaufighters and some sixty other allied aircraft. The Battle of the Bismarck Sea was a decisive victory and important turning point in the fight to save Australia from invasion.