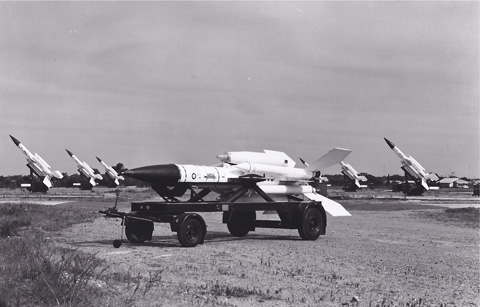 The Bloodhound was intended to form part of a UK defensive shield against strategic bombers and as such was a long - range high - speed weapon capable of intercepting enemy aircraft at high altitude. Development of the Bloodhound surface-to-air missile (SAM) was a joint project between Bristol Aircraft and Ferranti Electronics. In 1952, the design was accepted by the Combined United Kingdom / Australia Committee for trials and following initial firings in Wales, the first launches at the Woomera range in South Australia began in mid-1953, with firings against Jindivik target aircraft from 1956. The Mk 1 entered British service in 1958, and was selected for the RAAF in November of that year.

No 30 Squadron was equipped with the Bloodhound in January 1961 and was stationed at RAAF Base Williamtown, with a detachment forming in Darwin in 1965. The missile was retired from service in 1968. No 30 Squadron is the only RAAF unit to have operated surface to air missiles.