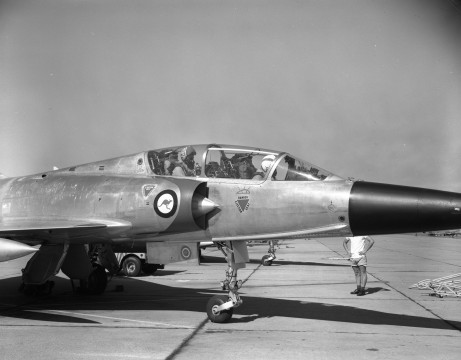 The Mirage IIID is a two-seat Mach 2 trainer and tactical strike aircraft. The first two-seater Mirage IIID, A3-101, flew on 6 October 1966 and was accepted by the RAAF at Avalon on 10 November, followed by a further nine over the next year. A second cockpit was added behind the first and the avionics equipment previously stored there was relocated in the nose. The
Mirage trainers were assembled by GAF from imported French-built fuselages and CAC-built wings and vertical tail surfaces. In December 1970 the government approved the procurement of six additional Mirage IIID trainers at a cost of $11 million. These aircraft, A3-111 to A3-116, delivered from August 1973 to January 1974, enabled the retirement of the Sabre from
operational fighter training.