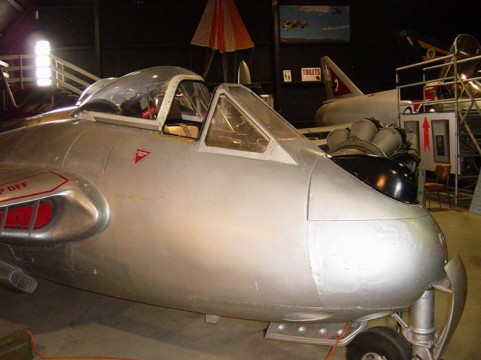 In 1946 approval was given for the purchase of an initial quantity of 50 Vampire aircraft for the RAAF. The first three machines were British-built aircraft, an F 1, F 2 and FB 5, and were given serial numbers A78-1 to 3. The first Australian built Vampire F30 fighter (A79-1 on display) flew in June 1949 and it was followed by 56 more F 30's before the final 23 aircraft were completed as FB 31's with strengthened and clipped wings and underwing hardpoints. The last FB 31 was delivered in August 1953. All aircraft built in Australia were powered by the CAC license-built Nene engine. Of all the Vampire aircraft produced, only the first two had sequential serials, A79-1 and 2. For security reasons, all later serials were scrambled.