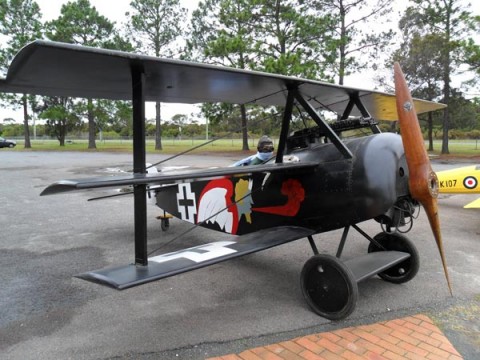 Manfred von Richtofen first flew the Fokker Triplane on 1st September 1917 and shot down two enemy aircraft in the next two days. He reported that the Fokker was far superior to the Sopwith Triplane. The Fokker, however, suffered chronic wing structural problems that destroyed any prospect of large-scale orders and production eventually ended in May 1918, by which time only 320 had been manufactured.

Fighterworld’s Fokker DR-1 Triplane is a two thirds scale replica of one of the most famous German fighters of WWI and currently hangs from the roof of the main hangar. The replica was one of four produced for a movie filmed on Stockton Beach and was acquired by a Newcastle Family who used the prop as an advertising feature on the roof of their Lambton shop. The aircraft was originally painted red – the colours of the original von Richtofen aircraft. The black paint scheme was adopted by Fighterworld and depicts the personal aircraft of fighter ace Leutnant Josef Jacobs who claimed 48 victories when in Command of Jagdstaffel 7 during 1918 at the age of only 25 years becoming the Triplane’s highest scoring Ace.