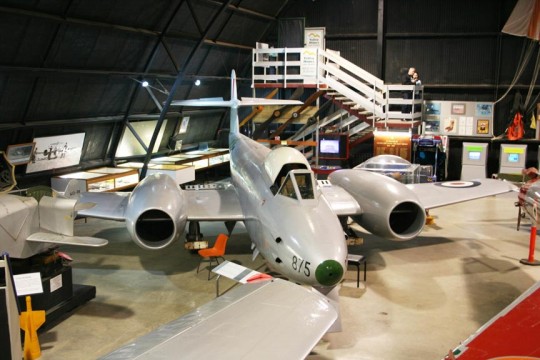 On 15 May 1941  the experimental Gloster E28/39 made the first flight by a British jet-propelled aircraft and on 5 March 1943 the Gloster Meteor became the Royal Air Force's first operational jet aircraft. In 1951 Meteors made their mark in RAAF history when they went into action with No 77 Squadron in Korea. The Meteor was armed with four 20-mm Hispano cannons; eight 27 kg (60 lb) rockets or 454 kg (1000lb) bomb load. A77-875 was delivered to the RAAF on 11 May 1953. It was possibly used for ground instruction and later served with 77 Sqn. The aircraft was part of the aerobatic display team 'The Meteorites' in 1958.