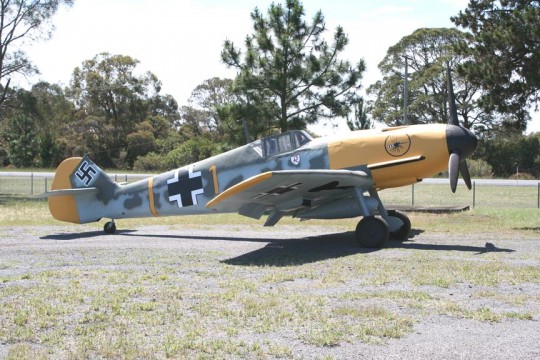 The BF-109 replica displayed is a full size fibreglass and timber replica of Germany’s most famous WWII fighter. It was one of the first truly modern fighters of the era, including such features as an all-metal monocoque construction, a closed canopy and a retractable landing gear. It was powered by a liquid cooled, inverted V12 aero engine. The BF-109 was the most produced warplane during WWII, with 30, 573 examples built during the war. The Spitfire and Messerschmitt were arch enemies in the famous Battle of Britain. Fighterworld’s replica is painted to represent the aircraft of Oberleutnant Carl Hans Roders who was killed when his Messerschmitt was shot down by a Spitfire over the English Channel on 23rd June, 1941.