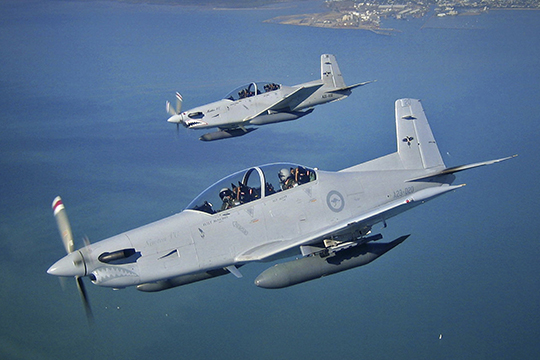 Pilatus PC-9/A
The Pilatus PC-9 is a single-engine, low-wing tandem-seat turboprop training aircraft manufactured by Pilatus Aircraft of Switzerland. Designed as a more powerful evolution of the Pilatus PC-7, the PC-9's first flight was made in May 1984 after which certification was achieved in September 1985.
67 of the two-seat trainers were ordered for the Royal Australian Air Force (RAAF) by Defence Minister Kim Beasley in July 1986. The first production aircraft for the RAAF flew on 19 May 1987, under the Australian designation PC-9/A. The first two aircraft (A23-001 and A23-002) were fully built by Pilatus in Switzerland and ferried to Australia in December 1987 under the Swiss registrations HB-HQA and HB-HQB. The next 17 aircraft (A23-003 to A23-019) were assembled in Australia from primarily Swiss components delivered as kits and the remaining 48 (A23-020 to A23-067) were built under licence in Australia by Hawker de Havilland.