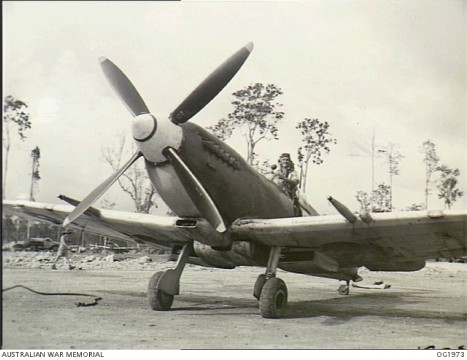 No. 452 Squadron was the first RAAF Squadron to fly the Supermarine Spitfire. Formed in Britain in 1941 during the Second World War the Squadron flew Spitfires for the entire period, initially over the UK and Nazi occupied Europe. Over 1200 Spitfires were delivered to RAAF Squadrons between April 1941 and October 1945.

The Mk VIII replica on display is a fibreglass, timber and metal replica of a RAAF 452 Squadron Spitfire flown by WGCDR Lou Spence and operated in the defence of Darwin during WWII. The replica has been constructed using some authentic Spitfire components; on your next visit to Fighter World see if you can identify them!

The Mk IX replica represents a Spitfire Mk IX of No 453 Squadron RAAF, operating from RAF Station Ford, UK. It wears the No 453 Squadron code letters FU and the individual aircraft letter Z (serial number MK421). The replica is painted in distinctive black and white markings known as ‘Invasion Stripes’ as it took part in the 6th June, 1944 invasion of Normandy, France. These special markings were applied to all allied single and twin engine aircraft to make them easily identified by friendly naval and ground forces.

The replicas were built for the Bi-Centennial Air Show at RAAF Richmond by Eddie Mathews (and his sons) a builder and aviation enthusiast from the Gold Coast and carefully restored by Fighter World volunteers.